By Luca Maes No Comments

Editor’s note: Alemany Farm is the recipient of an Oroweat Organic Spring Planting Grant. We were hoping to deliver their grant in person earlier this year, but covid-19 had other plans and we were not able to organize a public event with them to celebrate their work and express our support. Fortunately, Luca Maes, a high school junior who lives in the Bay Area offered to visit the farm and filed this report for us.

Alemany Farm has grown immensely since a group of gardeners first began to transform the abandoned 3.5-acre property in southeast San Francisco back in 2005. A flourishing green space in a sea of concrete, the farm is now home to more than 180 fruit trees, 21 raised beds, 37 full row crop beds, a restored riparian habitat and freshwater pond, and over an acre of designated native ecosphere and wildlife refuge, which surrounds the farmland. For the past fifteen years, the Friends of Alemany Farm, a team of two staff and seven volunteers that is sponsored by the San Francisco Parks Alliance, has grown free produce for low-income populations in southeast San Francisco, including for the public housing project directly adjacent to the farm. With the help of hundreds of community volunteers and through partnerships with local organizations, the farm is able to feed around 15,000 people in need annually. In addition, it provides over twenty on-site nutrition and horticulture workshops each year – in recent months, these have been replaced by low-to-no-cost virtual garden education programs in response to the ongoing Covid-19 pandemic.

During my visit to Alemany Farm, I spoke with Jack Thomas, assistant manager (pictured above), about how he believes the farm has positively impacted the community and what he sees in the future for both the farm and the community garden movement. Jack, along with the farm manager, Abby Bell, has the responsibility of educating, directing, and helping interns and volunteers, as well as doing a significant amount of farmwork himself. In fact, since the start of the Covid-19 pandemic, Jack and Abby have been doing much more of the labor by themselves, as the farm is no longer able to host hundreds of rotating volunteers. When not working in the gardens, Jack spends time researching the logistics of new projects and investigating fundraising methods, such as the grant they received from SeedMoney.

With a $5,000 SeedMoney grant, Alemany Farm was able to invest in a strategic partnership with their next-door neighbors, the adjacent housing project. Recently, the Friends of Alemany Farm has been endeavoring to start a new chapter of the farm, establishing new alliances and “forming honest-to-goodness friendships with the people who live within walking distance” of the site so that gradually the management of the farm will be handled more and more by the disadvantaged residents who surround it, and less by “upper-middle-class white folks” who don’t necessarily lack access to healthy food. The money from SeedMoney is what allowed Alemany Farm to start in this new direction, which manifested in the form of establishing a weekly produce give-away program at the housing project’s food pantry. The grant money facilitated the purchase of seeds and soil and funded staff members to grow and harvest the vegetables. But equally important from Jack’s perspective, the grant funded a staff member to distribute the vegetables on-site to the residents each Friday, and in the process “make eye contact, shake hands, learn names, tell stories, make friends,” helping the farm build lasting relationships with the immediate community.

Jack believes that the mission of Alemany Farm goes deeper than its stated mission of “[growing] free vegetables with and for low-income, historically disenfranchised communities” to “sow the seeds of food security, food sovereignty, and food justice in southeast San Francisco.” He maintains that the farm also serves the purpose of “bringing people and plants together.” Instead of learning how to garden by watching a YouTube video, he says, people from around the city come together to share in the extraordinary experience of growing their own food, and, in doing so, build an enduring community. He hopes that people leave Alemany Farm with the skills and relationships needed to develop a “robust and self-determined food network,” that does not need to rely on unaffordable chain stores such as Whole Foods to obtain fresh, healthy food.

Jack also sees Alemany Farm, and the community garden movement in general, as a crucial part of the solution to climate change. As a sustainable farm site that does not require the use of any electricity or gas-powered machines and as a carbon-capturing green space, Alemany Farm operates with a very low environmental impact. But the existence of the farm, within walking distance of thousands of city residents, also enables people in the neighborhood to obtain high-quality food without getting in a bus or car or at all participating in “an extractive, late-capitalist economy,” making them less dependent on an economic system that is built on a destructive, unhealthy relationship with nature. Jack understands that the cooperative environment of shared labor and interdependence of community gardens is the “perfect venue to cultivate an alternative mindset and system of community relationships that also model a type of society that we need to learn, or relearn…if we’re going to survive the next hundred years.”

I can say that from what I learned and saw during my few hours at Alemany Farm, community gardens such as this in every neighborhood in the world would certainly improve humanity’s chances of survival.

ABOUT THE AUTHOR: Luca Maes is a high school student from Davis, CA with an interest in food and sustainability issues. 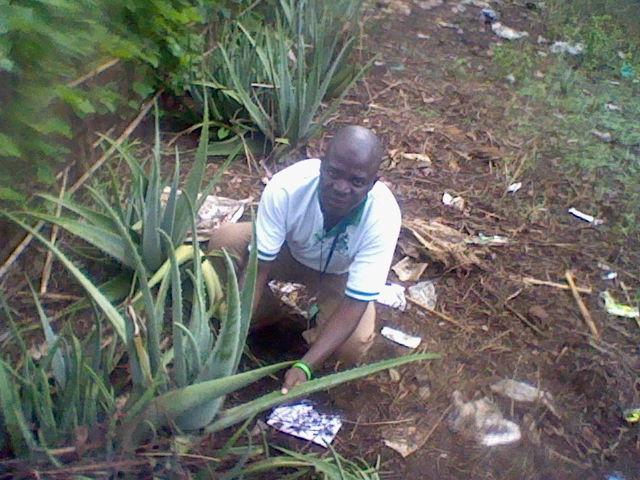 Community Gardens for Food and Nutrition

Community Gardens for Food and Nutrition